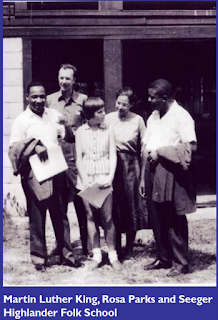 “We Shall Overcome” is a gospel hymn based on lyrics from African Methodist Episcopal Church minister Charles Albert Tindley, a composer of numerous gospel hymns in the early 1900s. In 1901, “I’ll Overcome Someday” appeared in print and was published in Philadelphia by Tindley. This hymn could have been influenced by “I’ll be All Right,” a southern spiritual pre-dating emancipation. The lyrics to Tindley’s hymn were subsequently embellished and the hymn as a whole grew to include more verses with additions by gospel arrangers Atron Twigg and Kenneth Morris (c. 1945). Twigg and Morris most likely used the melody of “I’ll Be All Right” as well.

The melody known today as “We Shall Overcome” could also have been arranged by Twigg and Morris. The first two melodic phrases of the song borrow from the older African American spiritual, “No More Auction Block for Me,” published in 1867 in a collection of “negro” spirituals. However, those same phrases are similar to the opening of the Latin hymn “O Sanctissima,” a traditional Sicilian Mariner’s Hymn that became popular in Baptist and Methodist churches in the South. Interestingly, the entire first half and final phrase of the melody now known as “We Shall Overcome” are nearly identical to parts of the German Christmas carol “O du Frohliche, O du Selige.” The German carol was first recorded on a cylinder recording in the Berlin Edison Studios in 1906 as performed by the Nebe-Quartett. The origin of the second half of the “We Shall Overcome” melody can only be speculated upon. It could very well be original to the gospel arrangers Atron Twigg and Kenneth Morris or, equally likely, traced to a group of white folk singers in Tennessee.

“We Shall Overcome” has become one of the most well known songs in America largely because of what happened at the Highlander Folk School in Monteagle, Tennessee, a school that trained union organizers. Zilphia Horton, the school’s music director from 1935 to 1956, published a book of songs entitled “People’s Songs.” This book included a hymn titled “We Will Overcome.” Horton had first heard the song in 1945 from Lucille Simmons who led a mostly African American female workforce on a strike against the American Tobacco Company in Charleston, South Carolina. Simmons ended each day of picketing during a 5-month strike with the song “We Will Overcome” changing Tindley’s “I” to “We.” Other lyrics were improvised over the melody during the strike producing phrases such as “We will organize,” “We will win our rights,” and “We will win this fight” and demonstrating the great versatility of the song.

Friend of the Highlander School, director of People’s Songs Publications and soon-to-be-famous folk musician Pete Seeger adapted and added words to this song – most notably changing “will” to “shall.” When Guy Carawan replaced Horton as song leader at Highlander, the school had become a national focus of student non-violent activism. The striking workers song that Horton had originally heard in Charleston in 1945 quickly became the Civil Rights Movement’s unofficial anthem with Carawan working to teach and promote the song wherever he could. Carawan’s friend Frank Hamilton of the folk group “The Weavers” learned the famous melody and lyrics from Seeger.

The Highlander School in Tennessee brought blacks and whites together as Civil Rights workers to share experiences and to learn from one another at a time when southern laws kept blacks and whites segregated. In July of 1955, Rosa Parks, secretary of the Montgomery NAACP, attended a workshop at the Highlander Folk School. On December 1st of that year, her arrest sparked the historic Montgomery Bus Boycott that was a cornerstone of the Civil Rights Movement. Bernice Johnson Reagon wrote: “Music supplied the cohesiveness to the masses of people of the Montgomery Bus Boycott.” Rosa Parks remarked in her 1973 honorary doctorate acceptance speech that Highlander was the first place where she had been in the company of whites who treated her as an equal human being. On September 2, 1957, Dr. Martin Luther King, Jr. delivered the featured speech at the Highlander Folk School’s 25th anniversary celebration. Pete Seeger performed at that same event as Dr. King listened and joined with the Highlander students and faculty in singing the now-famous “We Shall Overcome.”

Later that day, Dr. King found himself humming the tune while riding in a car and commented to one of his companions, “There’s something about that song that haunts you.” Obviously, thousands of others agreed. Seeger himself and other famous folksingers sang this song countless times at Civil Rights rallies and folk festivals helping to bring attention to the work of Dr. King. Joan Baez led a crowd of over 300,000 people singing “We Shall Overcome” at the Lincoln Memorial in Washington, D. C. in 1963.

Martin Luther King Jr. delivered his last Sunday sermon on March 31st, 1968, just a few days before he was slain. The text of this oration includes references to the “haunting” song he had first heard from Pete Seeger and the Highlanders a decade before and which had become such a hallmark of his work:

And so, however dark it is, however deep the angry feelings are, and however violent explosions are, I can still sing “We Shall Overcome.”