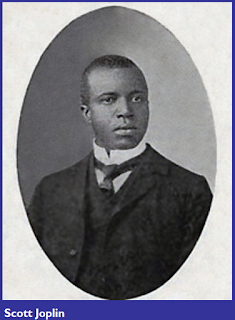 “The Entertainer” is a classic piano “rag” written in 1902 by African American composer Scott Joplin. Ragtime music, much like the hoedown that preceded it, is a unique blend of European styles and African American harmonies and rhythms. Joplin - The King of Ragtime - developed his “rags” while working in minstrel shows, vaudeville and dance halls in Texarkana, Sedalia and St. Louis where he lived, worked and honed his craft. He spent his final years in New York City attempting to have his music accepted by the classical music establishment.


Ragtime music developed among the slave fiddlers on the southern plantations in the mid-1800s. This new “ragged time” syncopated rhythm first manifested itself as a satirical musical expression mocking the “straight-laced” European music styles that were characterized by a heavy emphasis on down beats. The “swung” notes of the syncopated rhythm are the “and” beats of the count or the “up-bows” in the case of fiddle playing. The up-bows can be used as a means of expression when “swinging” the rhythm and the degree of how syncopated the music becomes - or how “hard” it swings - is determined by each individual player’s creativity and sense of self expression.

Within the rhythmic structure of a swung phrase, a slave musician could manifest his concept of relationships between whites and blacks. The downbeats can be seen as representing white culture – heavy, conservative, parochial, staid and relentlessly present – whereas the upbeats represent freedom, individual expression and an improvisatory spirit with a healthy dose of sass and satire directed at Europeanism and the resulting oppression. Hence, yet another style of music that could have happened only in  America was born.

This new expressive up beat - or “up bow” - eventually led to the creation of the basic rhythmic nature of jazz, rock & roll and hip-hop music. The subtle mocking of the white masters went largely undetected at the time and the white musicians and audiences were not at all offended by this new musical style. Quite the contrary, white listeners were very attracted to the new rhythmic quality of this music. White plantation owners even started a new tradition - a friendly competition called a “Cakewalk” - that featured dancing to this new syncopated music. Freshly baked cakes from the masters’ houses were awarded to slave dancers and slave musicians in lighthearted competitions usually taking place after church on Sundays. The “blackface” minstrel troupes in New York City quickly adapted the Cakewalk into their shows and, once again, unsuspecting white audiences did not fully realize that they were witnessing very cleverly disguised satire - slaves mocking the European music and dance styles of their white owners. The Cakewalk became a favorite part of minstrelsy and ragtime music itself rapidly grew in popularity, becoming beloved by all Americans, regardless of ethnicity. Scott Joplin was born in Texas in 1868. His father, who had been a slave, played the violin and his mother played the banjo. Young Joplin’s first instrument was the banjo and he later learned to play the violin and cornet as well as the piano. After the Joplin family moved from their family farm to Texarkana, young Scott began music lessons with a German-born teacher who instilled in him a love for opera and classical music. This early influence had a major effect on the direction of Joplin’s future compositions.

In his early 20s, Joplin joined a minstrel troupe in Texarkana. Within a few years he made his home in Sedalia, Missouri. A town notorious for vices and brothels, Sedalia also had social clubs for African American men in which Joplin could work as a pianist when not touring with his band. One of those clubs was The Maple Leaf, a name immortalized in Joplin’s first hit ragtime composition. “Maple Leaf Rag,” written in 1898, sold a million copies of sheet music during his lifetime. The next stop for Joplin was St. Louis where he spent the bulk of his time pursuing his aspirations to become a recognized classical music composer. During this time, Joplin removed much of the “swing” from his compositions, even indicating specifically in his scores to “not swing” the notes. Most of his music at this point was composed for John Stark’s publishing firm, The House of Classic Rags. Over the next several years, Stark published many Joplin rags including 1902’s masterpiece, “The Entertainer.” After writing an opera about African American leader Booker T. Washington’s dinner at President Roosevelt’s White House in 1901 (a work that was never staged and was ultimately lost), Joplin headed to New York City to find financial backing for his new opera "Treemonisha." This work had been inspired largely by Joplin’s mother and the lifestyle they had experienced together in Texarkana. Several attempts to stage the opera in New York failed and, at the same time, interest in ragtime music in general was giving way to the rising popularity of early jazz. The classical approach of Joplin’s work did not find an audience. At the time of his death in 1917, Scott Joplin was almost forgotten as a composer - the one exception being the continued popularity of his first ragtime piece “Maple Leaf Rag.”

In the 1940s, a ragtime revival led by jazz musicians eventually made inroads into the classical music world, a world that had eluded Joplin during his lifetime. Classical labels released recordings of classical musicians performing ragtime music resulting in extraordinarily successful sales. Joplin’s opera was successfully staged, finally  reaching Broadway. This renewed interest in his music presented a great opportunity for the spread of Joplin’s fame. George Roy Hill, the director of the hit movie The Sting (starring Paul Newman and Robert Redford), decided to use Joplin’s music throughout the film. Consequently, Joplin’s “The Entertainer” was introduced to the mass public 70 years after it was composed and became much more well-known than it had been even during the height of ragtime popularity many decades before. Posthumously, Scott Joplin was awarded the Pulitzer Prize in 1976 for "Treemonisha", the first successful opera composed by an African American.

From Book III of the O'Connor Method
www.oconnormethod.com
Posted by Mark O'Connor at 6:18 PM