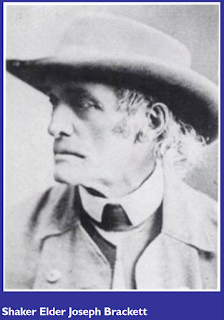 “Simple Gifts” is a dance song emanating from the religious Shaker community of Maine in the early 1800s. The first Shaker songs were composed by church leaders circa 1781 when Mother Ann Lee, her brother Father William Lee, and Father James Whittaker emigrated from England to the United States. The Shakers practiced an unusual and highly rhythmic - sometimes even ecstatic - type of dancing during their worshipping. They would often clap their hands, sing, tremble and shake their bodies, ultimately falling to the floor in exhaustion. Sometimes, men and women would form concentric rings surrounding the singers during these rituals.

Although there is no known document that states this, it is believed by some Shaker historians that an elder named Joseph Brackett composed both the melody and the lyrics of “Simple Gifts” in 1848. Generations of oral history passed down through the Shaker community substantiates that the song originated with Brackett and was taught by him to others. 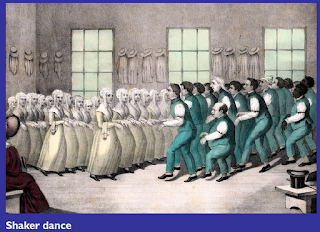 Brackett was born in Cumberland, Maine in 1797 and changed his birth name (Elisha) to Joseph when his entire family converted to Shakerism. He joined the Shaker community in Gorham, Maine, and then became First Minister at the Shaker Community of New Gloucester. Like many Shaker elders, Brackett was not trained formally in music but developed his musical talents through writing music for church rituals.

The thousands of songs and hymns composed by Shaker elders have been perpetuated almost exclusively by oral sharing among Shaker villagers. It is possible that “Simple Gifts,” like other Shaker songs, was performed in public squares as Shakers often recruited new members by singing and dancing to attract attention to their religious beliefs. Recruiting new members from “outside the fold” was paramount because the Shakers practiced strict celibacy and therefore could not replenish their membership without doing so.

“Simple Gifts” (also known as “Tis a Gift to be Simple”) was originally described as a “quick dance.” Its lyrics have an inviting and universal message:

When true simplicity is gain’d,
To bow and to bend we shan’t be asham’d,
To turn, turn will be our delight
‘Till by turning, turning we come round right.

It is believed that the singers performed descriptive dance steps as they sang about “turning round right.” 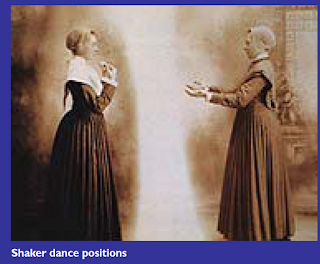 This song could have remained relatively obscure were it not for a collaboration between American composer Aaron Copland and American choreographer Martha Graham. In a visit to a summer music festival in Tanglewood, Massachusetts, Copland acquired, at Graham’s urging, a book about the Shakers. This book, written by Edward Deming Andrews, contained Shaker songs and among them was “Tis a Gift to be Simple.” Graham, who wanted the new ballet on which she was working to reflect the heritage of her own New England pioneering ancestors, hoped that Copland would find some authentic rural or rustic materials to use as the basis and inspiration for the music she had commissioned him to compose for her project.

The result of this collaboration was the ballet, “Appalachian Spring,” which toured throughout the United States in 1944 and quickly won the hearts of Americans. Even during those first performances, the Shaker theme stood out to audiences and became a tune they could “take away” from the performance. The distinguished symphonist Aaron Copland, unlike his contemporary George Gershwin, was not known for his ability to write especially fine original melodies. He had more success orchestrating traditional folk music, often using note-for-note renditions of already established melodies. Copland’s genius included his ability to recognize great melodies wherever and whenever he heard them. In “Simple Gifts” he recognized and championed a theme that went on to become known as one of the  greatest melodies in American history and without his treatment and scoring, we would probably have never known it. Copland’s powerful orchestration of the ballet music he wrote for Martha Graham (originally scored for 13 instruments) became one of the greatest symphonic concert pieces in American music – “Appalachian Spring.”

From Book III of the O'Connor Method.
www.oconnormethod.com
Posted by Mark O'Connor at 6:19 PM