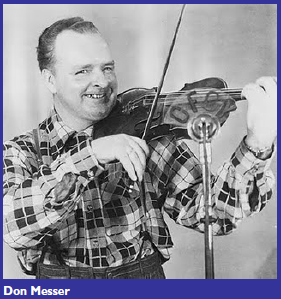 “Rippling Water Jig” is a tune popularized by Canada’s most famous fiddler – Don Messer. Messer and his band The Islanders (named for residing in Prince Edward Island in the Maritimes) recorded the tune in 1947. It soon became a hit all over Canada.

Donald Charles Frederick Messer (1909-1973) was born in New Brunswick and began learning Irish and Scottish tunes on the violin when he was five years old. After studying music formally for a few years in Boston, Messer returned to Canada and lived in Prince Edward Island, Nova Scotia and Ontario for the remainder of his life. He became a radio star in the 1920s and by the ‘30s he was broadcast regularly throughout Canada on the CBC. While in Halifax, Messer gained widespread fame through the success of his hit television show “Don Messer’s Jubilee.” Millions of viewers tuned in to watch and listen to Messer’s fiddling in the 1950s and ‘60s, often hearing the lively “Rippling Water Jig.” 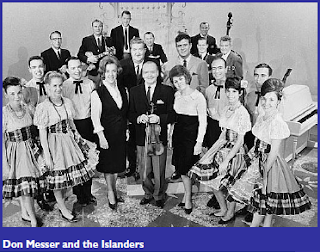 Although it is unclear as to who actually composed this popular jig, it is widely known that Messer was the first to be commonly associated with it. The Islanders did perform many original tunes that were certainly written by Messer as well as those of other fiddler/composers such as Al Cherny, Andy DeJarlis, Jim Magill and Graham Townsend.

An American fiddle legend, Joe Pancerzewski, lived in Washington State and helped spread this tune in the northwestern United States by teaching it to young fiddlers. Pancerzewski originally homesteaded in North Dakota in 1909 and spent much of his early musical life in Saskatchewan becoming known for his Western Canadian fiddle style. In 1924, he moved to Bellingham, Washington, where he played popular dance band music on the fiddle. He also performed with the theater orchestra at the Pantages, a concert hall that still presents concerts to this day, and was known to perform occasionally a novelty solo act called the “Yankee Fiddler.”

Most great Canadian fiddlers – including Ed Gyurki - incorporated “Rippling Water Jig” into their regular performing repertoires. However, it was the superstar personality Don Messer’s playing of it on one of the most popular TV shows in Canada that introduced it to fiddlers all over Canada and America.