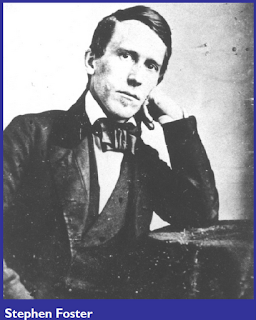 Stephen Foster, the composer of “Old Folks at Home,” was America’s first songwriting professional. This song was written in 1851 and is also well known by its first line, “Way down upon the Swanee River.” “Old Folks at Home,” like many of Foster’s successful songs of the same period, raised political consciousness through endearing melodies and sympathetic lyrics depicting African American slaves as having “real lives” and “real feelings.” “Old Folks” went further than any song before to “humanize” southern slaves in the minds of northern audiences who were attending minstrel shows principally in the Bowery District of New York City beginning in the 1830s.

Some aspects of the minstrelsy, including many of the lyrics, skits, humor and appearances, were racist and degrading to many groups of people and especially to African Americans. However, the instrumental music was not degrading, often drawing dedicated musicians to the troupes having learned the craft of southern music-making. One can also recognize Foster’s subtler and perhaps even subversive use of these theatrical musical shows to introduce aspects of African American music. Northerners fought in the Civil War to free the slaves in the South just ten years after Foster’s songs about African American families and their lives in the South became hugely popular in the North – songs like “Old Folks at Home” and “My Old Kentucky Home.” 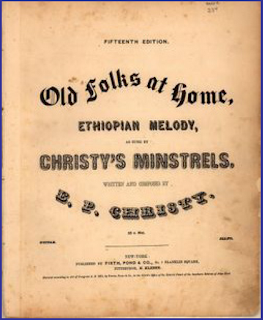 Stephen Collins Foster (1826-1864) was born and raised in Pittsburgh and performed in amateur minstrelsy himself. The minstrel shows originally developed out of the “Ethiopian Delineators” of the 1820s and the burlesques and entr’actes in the 1830s. In 1842, songwriter Daniel Decatur Emmett produced programs in New York City that included singing and dancing in “blackface” with featured instruments known to be favorites of African American musicians: fiddles, banjos, bones, castanets and tambourines. Emmett’s Virginia Minstrels opened in a New York City theatre in 1843. Stephen Foster met Edwin Christy in 1847 and he began to write songs for the Christy Minstrels’ shows incorporating skits and songs performed in an imitation of “plantation dialect.” The shows typically began with a “walkaround” and a “cakewalk.” The white audiences of the northern states loved the cakewalks, probably not fully realizing that they depicted how plantation slaves would mock their masters’ stiff and pretentious formal dancing and “fancy airs.”

The minstrel show genre was clearly “racy” entertainment, but for Foster, it alternately acted as a forum to introduce African American culture - and especially its music - in a non-threatening way being surrounded by tasteless and degrading humor. Foster’s “Oh Susanna” was one of his earliest successes during this time. This song followed the same pattern of the Virginia Minstrels’ songs having a dance tune melody with African American syncopated rhythms accompanied by non-narrative, irrational lyrics: “The sun so hot, I froze to death, Susanna don’t you cry.” Through the prism of exaggerated and racist dialects and antics, the northern white audiences were subtly swept into this new syncopated and jazzy music they would have otherwise ignored.

After realizing he had access to the biggest stage in the country for his songs, and an upper-class white audience that seemed to embrace whatever he offered them, Foster began to write music that contained deeper subject matter, musically elevating African American slaves to equality as human beings with emotions common to all - love for family, pride in hard work, sorrow from hard luck and indignity at injustice. Foster’s conscience began to elevate to a broader social agenda. The success of the songs was crucial for any political movement contained within them, but the “agenda” was cleverly disguised in order to ensure the success of the music itself. Foster’s musical gift for creating melody was his greatest weapon to change hearts, and his tunes got his audiences singing and whistling, thereby easily recalling Foster’s subjects in a sympathetic light.

With “Old Folks at Home,” Foster saved perhaps his most deeply moving melody to match his great message. The music itself was ahead of its time. Its harmonic movement through “jazz” chords many years before there was “jazz music” per se foreshadows every jazz musical harmony to come for the next 100 years. With complex underpinning harmony propelling nearly every beat, the melody itself remained at once breathtakingly sophisticated and immediately accessible. In creating the lyrics to this tune, Foster leaves the “irrational racist lyric” style of the common minstrel show behind. The lyrics are both specific and universal, painting a vivid picture of life in the South and evoking the universal human emotion of yearning for home – a home of one’s own. 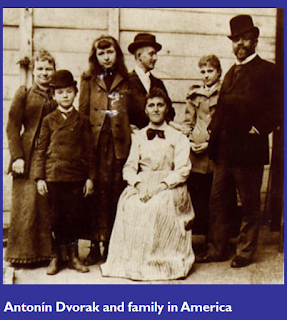 Exactly 30 years after Foster’s death, Antonín Dvorˇ ák came to America to head up the American Music School in New York City. With a keen ear for the musical culture of his new home, the great composer of the New World Symphony sought to guide Americans toward a musical heritage of their own. Dvorˇ ák, one of the greatest composers of his time, perhaps had the perspective to rise above all of the racial politics that plagued most Americans in post Civil War era. He described the African American “plantation songs” of the minstrel shows as the “beauties that surround us” and as material fitting for the basis of a great American classical music. He singled out “Old Folks at Home” by Stephen Foster and, in fact, transcribed and composed an arrangement of it premiering it, while he lived in New York City in the 1890s. He sought to elevate the music of Foster to a level worthy of serious attention by his academic colleagues at the universities he visited.

Stephen Foster died at the tragically young age of 37 in New York City on January 13, 1864, one year before the conclusion of the Civil War. He did not live to see freedom for the African American slaves - the very people to whom he had given a heart and a voice in his songs. He is said to have died penniless, but he had kept writing songs, though, through good times and bad. Today he is not only remembered as America’s first professional songwriter, but as one of the greatest ever.

From Book III of the O'Connor Method. Click here to listen to "Old Folks at Home".
www.oconnormethod.com
Posted by Mark O'Connor at 6:18 PM