“Sweet Betsy from Pike” is a song about two young “forty-niners” traveling
from Pike County, Missouri, to the gold fields of California. In 1849, word traveled across the country that there was a fortune to be found in California's Sierra Mountains. Thousands of people left their homes and endured tremendous hardships journeying west to look for gold. The lyrics to this song describe many of the troubles typically encountered by the “forty-niners.” The song's author is unknown, but the lyrics may have been written by John A. Stone. Stone, also known as “Old Put,” was a San Francisco entertainer who wrote, adapted and collected songs about the gold miners of that time. 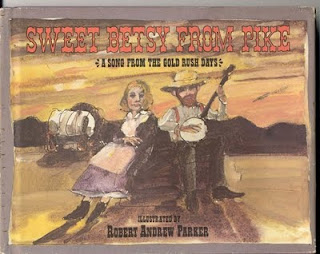 The melody is most likely a variation of a tune originally from Ireland. The hard times described in the song become especially poignant when, after all of their trials and tribulations during their journey west, Betsy and Ike do not end up together as a couple.

Read more about what there is to learn about "Sweet Besty from Pike" here!

From Book I of the O'Connor Method.
www.oconnormethod.com
Posted by Mark O'Connor at 1:10 PM