“Off She Goes” is one of the most recorded jigs in history. 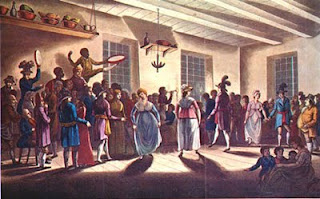 The author is unknown but the tune could date from more than 250 years ago in the British Isles. Although the Jig dance most likely originated in England-Ireland-Scotland, the word ‘jig’ is derived from the French word ‘giguer’ which means ‘to dance.’ The 1600s found dances known as Gigues becoming popular in France and faster-tempo Gigas being played in Italy.

The association of this dance form with the violin was established at the very beginning. Johann Sebastian Bach composed many pieces, usually Suite movements, for solo violin, solo cello and string orchestra in the form of the Gigue. When “Off She Goes” found its way to Canada, it became very popular and both the French and English-speaking parts of Canada knew the tune and fiddled it often. Canada, like the United States, has fiddling traditions going back at least 400 years. By the 19th century, many distinct regional styles had developed in the Eastern parts of Canada. The French- Canadian style, from Quebec and Acadia, reflects the French influence and can be found in many of the Eastern Atlantic areas of Canada and down the coast into Maine. Cape Breton fiddling and the related styles from Newfoundland and Prince Edward Island have closer ties to the Scottish tradition.

Métis fiddling, which is a mixture of native Plains Ojibwa, French and Scottish traditions, can be heard in the Northern areas of Ontario, Quebec and Manitoba. ‘Down East’ fiddling is common in the English Maritime region, New Brunswick and the Ottowa Valley of Ontario, as well as in the Prairies - Alberta, Manitoba and Saskatchewan.

From Book II of the O'Connor Method.
www.oconnormethod.com
Posted by Mark O'Connor at 4:14 PM