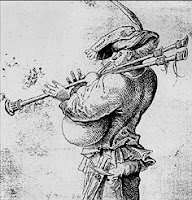 Amazing Grace is a hymn. The lyrics were written by John Newton, slave ship captain (B. 1725, London). On one voyage, a violent storm swept a crewman overboard from the place where Newton had been standing just minutes before. As he continued steering the ship through the storm, he realized his ultimate helplessness and concluded that only the grace of God could save him and the ship.

Many years later, Newton turned to the ministry and repented his role in slavery. The lyrics of “Amazing Grace” are his reflections on a Biblical text and describe his own conversion while on his ship in 1748.


From Book I of the O'Connor Method.
Purchase this piece from Mark O'Connor's Double Violin Concerto Album or Midnight on the Water.
www.oconnormethod.com
Posted by Mark O'Connor at 11:51 AM