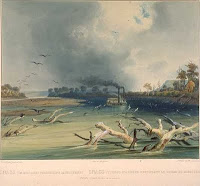 “Shenandoah” belongs to a category of folksongs known as Sea Shanties, derived from the French word “chanter” meaning “to sing” and often heard on Missouri River steamships. This particular shanty features one of the most beautiful melodies in American music. The lyrics tell the story of an American journey westward.

The ancient Native American legend of the Shenandoah Valley - Daughter of the Stars - is attributed to the Senedo tribe, who lived in what is now known as Virginia. The Shenandoah Valley’s local native population was virtually eliminated in 1732 by the Cherokee Nation, their enemies to the South. When the first Europeans began to settle the area around the same time, the Shenandoah Valley was used only as a hunting ground for the neighboring Shawnee, Iroquois, Occoneechee, Monacans and Piscataways. No tribe laid claim to the land.

The lyrics to “Shenandoah” present a mystery: “O Shenandoah I love your daughter (sometimes ‘waters’), Far away you rollin’ river, O Shenandoah, I long to see you, Away, I’m bound away, Cross the wide Missouri.” One interpretation has a man falling in love with the daughter of an Native American chief (Shenandoah) and having his heart torn as he leaves her and travels a thousand miles to the Missouri River and the West. However, since there were no longer native tribes in the valley by the 1730s, and since most sea shanty songs we know today date back only as far as the early 1800s, the lyrics most probably reference longing for the beautiful rivers of the Shenandoah Valley and not for a woman. 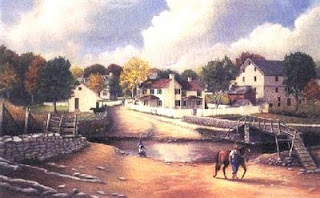 In 1803, heading West became an objective for many new Americans living in the Shenandoah Valley when President Jefferson created initiatives encouraging them to seek their fortunes beyond the Missouri. An ancient Native American route (known as Indian Road or Great Wagon Road) was established in the Shenandoah Valley as a main artery for Westward expansion.

“Shenandoah’s” lyrics exhibit quintessential Americana ideals: reverence for the natural beauty of the land, traveling to find a better life with more freedom and the nostalgia of remembering home. In this song the lyrics sing of the sadness of leaving the “rolling” Shenandoah River, the “daughter” of the stars, for the unknown frontier of the Big Muddy or River of the West - the “wide Missouri.”

From Book II of the O'Connor Method.
www.oconnormethod.com
Posted by Mark O'Connor at 4:38 PM