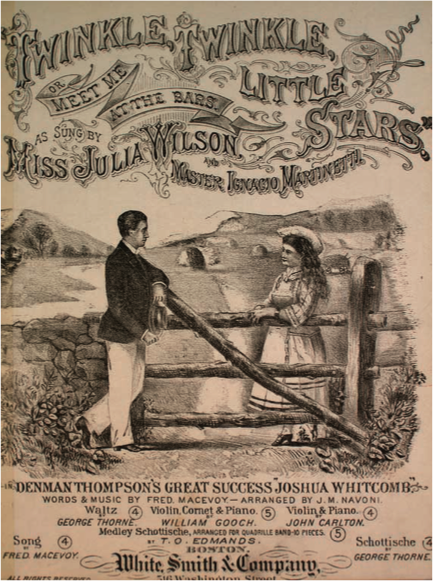 Less commonly known is the “American Twinkle.” Twinkle Twinkle Little Stars first appeared as a “Schottische” dance tune that became popular with musicians following the Civil War in 1879. A Schottische is a folk dance that features a dotted 8th note followed by a 16th note rhythm producing an exaggerated swung beat. Employing this rhythmic style, American composer and lyricist Fred Macevoy composed the melody and lyrics and it was arranged by J. M. Navoni for Miss Julia Wilson and ballet master Ignacio Martinetti to sing in a vaudeville show. It was Denman Thompson’s successful vaudeville sketch Joshua Whitcomb about a New Hampshire yokel who comes to the big city that propelled this tune into use in many American music genres. As with many popular American songs of that time period, publishers rolled out solo violin and piano versions of the music, orchestrations and choral treatments in addition to the song with lyrics.

The Schottische style was popular dance music originating from Bohemia and by the mid-1800s had become a staple in ballroom dance halls all through Europe as well as South and North America. The Schottische exhibited the sort of rhythmic feel that easily translated to other styles. In Bohemia, the dance was also known as the “Polka Tremblante.” In Ireland, it was similar to the “Highland” tunes. In Argentina, the Schottische mixed into the indigenous folk music genre called “Chamame.” In Finland the Schottische groove was the “Jenkka,” in Norway the “Rheinlander,” in Portugal the “Xote” and in Spain the “Chotis. In mid-1800s America, California ballroom variants included the “Five- Step Schottische” and the “Highland Schottische.” In Texas in the early 1900s, this music cross-pollinated with ragtime creating “Ragtime Schottische.”

The earliest recordings of Twinkle Twinkle Little Stars by fiddlers include versions by Mississippi’s W.T. Narmour and S.W. Smith in 1928 as well as the Schottische dance rendition by Texas fiddle bands like Smith’s Garage Fiddle Band in that same year. The recording of the tune by Bob Wills in 1938 was less Schottische and more Texas swing. As the years went by, the Schottische dance began to fade out of fash­ion as ragtime and swing styles were more widely adopted by American fiddlers. By the mid 1900s, Twinkle Twinkle Little Stars became one of the popular Texas fiddle “tunes of choice” on the fiddle contest circuit. Mostly performed in the ragtime swing tempo, the frequent jumps up to 4th position in the tune’s “B” part and the rendition popularized by the Wills’ band gave fiddle contestants an opportunity to show their shifting and intonation accuracy to fiddle contest judges and audiences.

In time, swifter tempos took over and the tune became a full-fledged Bluegrass breakdown. The ragtime and swing styles earlier associated with the tune as well as the original Schottische feel became a faint memory.

This classic tune is a prime example of an American Music gem – a tune that has survived many stylistic treatments and endured for over 150 years. The current version featured here has been developed so much by musicians adding to the melody and changing the rhythmic feel and tempo, that it is hard to imagine these lyrics that came from the original song: The pretty little stars are laughing, love, They speak to me of you, They tell me as the twinkle of above, That you to me are true.