Minor Swing is a one of the most popular swing tunes composed by the legendary French Gypsy jazz originators Django Reinhardt and Stephane Grappelli. The pair recorded the tune as a 78 single in 1937 with their group The Quintet of the Hot Club of France. The band’s personnel included Joseph Reinhardt and Eugene Vees on rhythm guitars and Louis Vola on bass. Django’s “wall of guitars” was something exceptional. The other two guitarists were not allowed to play while Django was accompanying the incomparable Stephane Grappelli on jazz violin, but when it was time for Django to solo, he needed two rhythm guitars behind him to make up the difference from his own powerful rhythm guitar having dropped out! It is likely that this ensemble formula will not be imitated!

Although violin was Grappelli’s primary instrument, he was also an outstanding jazz pianist and played saxophone in Tango bands in the 1920s. Because Reinhardt was an authentic Gypsy – born and raised in the ever-moving camps - strings were the most prevalent musical instruments in his environment. Reinhardt started out playing the banjo and loved playing the violin in the “manouch” style. It was unusual for Gypsy musicians to make music with outsiders but it is not hard to imagine how Django would have been drawn to Grappelli’s violin playing. Even though Reinhardt was an exceptional fiddler himself, he always deferred to Grappelli on violin. Both musicians were extraordinary improvisers with commanding technical facility, however it was Reinhardt who was more inclined to compose tunes. They shared the credit for composing Minor Swing, however, essentially a jam tune without a distinctive theme in the middle or B part. The melodic and rhythmic hook of the A part is intoxicating and has won many a musician over to wanting to play Gypsy jazz in the manouche style – including Grappelli!

Stephane Grappelli was born in Paris on January 26, 1908. He describes his childhood as being “like a Dickens novel.” His French mother died when he was three years old. His Italian father, a Latin scholar who taught philosophy, had no choice but to put him into a very poor Catholic orphanage. When his father returned from war, Grappelli moved back in with him. “Because of my father, I became a musician,” Grappelli says. “He bought me a ¾ violin and all the way home I hugged it so hard I almost broke it. I still have that violin on my desk at home. There was no money for lessons, so my father took a book from the library and we learned solfeggio together. I never had a violin teacher, so I learned good position and posture by sheer luck.” Grappelli also taught himself to play piano, enjoying the expanded harmonic possibilities of the keyboard.

By the age of 14, Grappelli was earning a living accompanying silent films on piano and violin in a Parisian movie theatre. He was introduced to jazz at a music emporium next to the cinema where, for a few centimes, one could put on headphones and hear the newest tunes to hit Paris. Lady Be Good, Tea For Two and Stumbling excited and amazed him. He played in back-alley cabarets, street-side cafes and hotel lobbies until age 17 when he began playing in dance bands. Jazz artists like Bix Beiderbecke, Art Tatum and Louis Armstrong, along with jazz violinists Eddie South and Joe Venuti, were all major influences on his style.

At 20, Grappelli was playing with Gregor and His Gregorians, a 17-piece band. Shortly after, he was hired by a Montparhasse club as alto saxophonist for their big band tunes and violinist for the tangos. In 1931, at age 23, he encountered the Belgian Gypsy guitarist, Django Reinhardt. Three years later they played together for the first time at the Hotel Claridge in Paris. One day, between sets, they suddenly started playing Dinah pretending to be Eddie Lang and Joe Venuti, the great jazz guitar and violin duo from America. At about this time, French jazz critic Hughes Pannasie organized the Hot Club of France and employed Stephane and Django. Audiences flocked to hear them and their new quin­tet became the premier European jazz band. They performed extensively and recorded hundreds of 78s from 1934 to 1939. 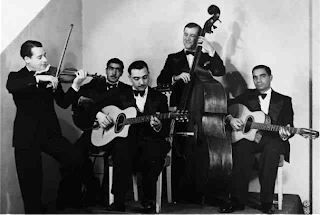 Grappelli and Reinhardt enjoyed several reunions after World War II, but the partnership ended forever in 1953 with Django’s death. Grappelli periodically joined with other fine jazz musicians and continued to work in Paris and London, however by the 1960s his career had taken a down turn. At the same time, an increase in the guitar’s popularity brought much attention to the legend of Django Reinhardt. Many recordings of the old quintet were re-issued on LP. Even though Grappelli had previ­ously shared equal billing with Django, these albums featured Django’s name and likeness on the cover with Grappelli’s name in small print or absent altogether. Being a victim of corrupt music business dealings leaving him no royalty receipts and of record company marketing that left him out of the picture, the artistry of Stephane Grappelli was nearly forgotten. Fortunately, in 1973, Grappelli revived his string band jazz music and debuted at the Cambridge Festival in England with two guitars and a bass. The band was a hit and, at age 65, Stephane Grappelli had a new career! While he was touring internationally with the Diz Disley Trio, I auditioned for Grappelli’s group on guitar and became his student on violin. We played many venues together - including Carnegie Hall - often performing twin violin pieces and bouncing improvisational solos back and forth.
Posted by Mark O'Connor at 11:00 AM