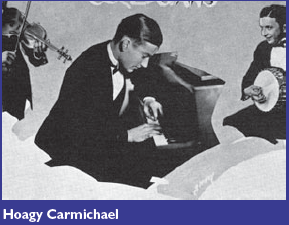 “Up a Lazy River” – a lazy jazzy tune that has become beloved around the world – was first recorded by Hoagy Carmichael in 1930 and is credited to have been written by him and Sidney Arodin. Phil Harris and Louis Armstrong & His Orchestra followed shortly with recordings in 1931 and ’32 respectively. Woody Herman, Les Paul, Nat King Cole, Chet Atkins, Glenn Miller, The Platters and Hank Thompson are among the many famous artists representing most every genre of American music who have recorded “Lazy River.”

As it previously had for many others, “Lazy River” became a big hit for the Mills Brothers in 1952. The tune also became a favorite among American fiddlers. Bob Wills and the Texas Playboys recorded it in 1947. Almost forty years later, Danish jazz violin legend Svend Asmussen recorded his version in 1983. Asmussen and western swing fiddle pioneer Johnny Gimble performed it together on the popular television show Hee Haw. Texas fiddle great and world-champion fiddler Terry Morris often played this tune in the 1970s and ‘80s. World famous clarinetists Benny Goodman and Pete Fountain loved it too and both made significant recordings of it. It is interesting that Goodman’s and Bob Wills’ recordings were released in the same year -1947.

As is the case with many classic American tunes, it is not entirely clear who actually composed the famous melody. “Up a Lazy River” is the only known collaboration between Carmichael and Arodin – a very unlikely musical pair. Carmichael, a former lawyer, became one of America’s most well-known songwriters with “Star Dust” and “Georgia On My Mind” to his credit. He circulated in the top music circles in New York City and Hollywood, hobnobbing with George Gershwin and other music-industry notables. By contrast, clarinetist Sidney Arodin was largely unknown, scrambled for a living working on the riverboats out of New Orleans and reportedly sold or traded his tunes for whatever they would bring at the moment. In Carmichael’s other musical collaborations, he was known for composing the music with others contributing the lyrics. It was assumed, therefore, that this was the case with “Lazy River” – that Carmichael had written the melody and the unknown Arodin had supplied the lyrics. Using the music itself as evidence, however, it is more likely that something entirely different occurred.

The original melody line is filled with awkward leaps from a vocal perspective, but which work very well on the clarinet – and, indeed, on the violin. The melody possesses the quality of a clarinet solo and it is not surprising that it caught the attention of two clarinet greats who recorded it early on. Furthermore, it has been noted that some fiddlers have tried to imitate clarinet tone and phrasing when playing this tune. All of this does raise the question as to whether Carmichael actually wrote either the tune or the lyrics. Given Carmichael’s law degree, a simple signature could have added his name to the credits to help promote a musical gem produced by an unknown musician. 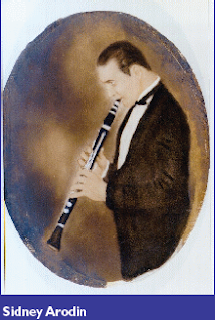 Sidney Arnandan (or Arnondrin) - better known as Sidney Arodin - was born in Louisiana in 1901. He began playing clarinet at age 15 and started making his living playing on New Orleans riverboats heading “up the lazy river” to New York City by the mid 1920s. Once there, he worked for Johnny Stein and Jimmy Durante. Carmichael moved to the City around 1929 when he was still polishing his songwriting skills. In the '30s, after the first recordings of “Lazy River” were released, Arodin was back in New Orleans on the Mississippi playing with Wingy Manone, Sharkey Bonano, Louis Prima and The New Orleans Rhythm Kings where he remained until his death in 1948. One hopes that he was able to hear Benny Goodman’s recording of “Lazy River” from the previous year.

Sidney Arodin must have loved rivers and river life. The river themes in his music date all the way back to his earliest days of working on the riverboats and nearly all the songs he wrote contain “River” in their titles. “Up a Lazy River” is, of course, the most famous of them. Another well-known song that can possibly be attributed to him is “Drifting on a River” which, interestingly, is based on the same chord progression as “Lazy River.” It is also reported by contemporaries that this particular chord progression is one that Arodin liked to play as a warm-up on his clarinet. Those who knew Arodin have reported that “Lazy River” perfectly matches his mood and character and the “style of his playing and personal expression.”

Given that Arodin played in several recording sessions, it is odd that he never recorded “Lazy River.” It is also curious that, on many cover versions by other artists, Arodin’s name was not included as a co-composer. Furthermore, because Arodin is reported to have “sold” many songs that he claimed to have written sometimes for as little as a bottle of wine, there is acknowledged speculation that Arodin might have sold “Lazy River” and all the recording rights to Carmichael for a pittance out of desperation to break into the music scene in New York City. Another source reports that Carmichael may have changed just one word in the title to claim “collaboration” and that all the rest – melody and lyrics - was really the work of Sidney Arodin.

A strange but perhaps not uncommon story: a spark of genius from a hard-working, relatively unknown musician traveling from New Orleans to New York City, catching the attention of a more well-known and wellconnected musician and becoming one of the great American hit songs of the 20th Century!

From Book III of the O'Connor Method
www.oconnormethod.com
Posted by Mark O'Connor at 6:17 PM